Battle of the Birds Act 2: Murder on the Owl Express 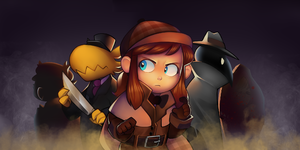 intro to the act

Murder on the Owl Express is the second Act of Battle of the Birds in A Hat in Time and is the first act focus on The Conductor.

Hat Kid arrives on a train, where a lot of Crows, who had entered the train on the last station, start to ask her random questions. After Hat Kid arrives at the conductor rooms, she finds a present with a detective outfit (that replaces her default outfit) and receives a weird phone call. When Hat Kid goes back to the last wagon of the train, she finds an owl with a knife in its back in a pool of blood. Now it's up to Hat Girl to find out, who was the murderer.

In this Act, each piece of evidence you collect will point towards one of six possible suspects. If somehow, you fail to collect any pieces of evidence, you will be given a single piece of evidence so that you can accuse someone of the murder.

The suspects are, in the order that you'd get evidence for them, and including their quotes and motives: