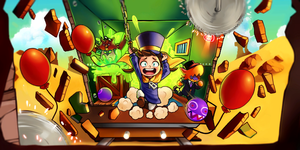 Intro to the Act

Act 4: Train Rush is the forth Act in Chapter 2:Battle of the Birds in A Hat in Time, and is the second and last Act focus on The Conductor.

Hat Kid has to, after starting the self-destruction sequence of the train, work her way to the front of the train, to disarm the bomb before it goes off - all of this is part of The Conductor's next big movie.