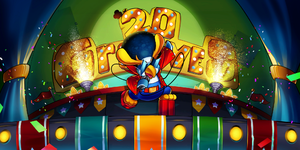 DJ Grooves is a important Character in Chapter 2: Battle of the Birds, he is the leader of the penguins, is a concurrent in the Movie awards and one of the two final boss options at the end of Chapter 2.

Dj Grooves is one of the Moon Penguins and as such looks mostly like them. He has
Personality wise, he is energetic and talkative and talks with a lot of 70s lingo. He also seems to be a fan of sci-fi movies.

It's reveal in the Time Rift mission that both DJ Grooves and The Conductor dream to work as director ever since they were little and that the first fight they had was when both rented the same studio.