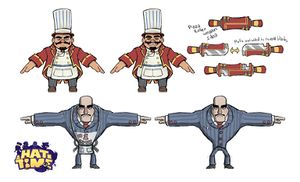 Concept of the Mafia Boss and Mafia Guy

Mafia Boss is the commander of Mafia Town and the Final Boss for Chapter 1: Mafia Town.

The Mafia Boss is a male adult with black hair, moustache and a goatee. He wears a chef uniform under a circus master coat and a chef hat on his head. As a weapon, he uses a rolling pin that has hidden blades inside it.

At the start of the fight the Mafia Boss will use several attacks, but if he becomes blue it means that you can hit him. One attack he will spin creating several electric shock waves at your way, after that he becomes vulnerable; another attack is where he will spin toward a direction - during the attack he is vulnerable to a homing attack; the last and biggest attack is where he will call the mafia who are in the crowd to create a ball of mafia guys, which he dubs a Mafia Ball, but the ball will have a little gap that you can sneak in to avoid damage, after that go to the top and attack the vulnerable Mafia Boss.

Sometime after his defeat, there will be an Intruder Detected in the Engine Room, which happens to be what remains of the Mafia Boss after what had happened to him after his defeat. He sells a single badge: the Relic Finder's Badge for 100