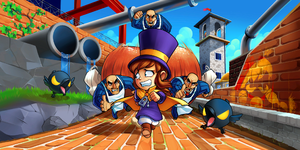 intro to the act

After falling from her Space Ship, Hat Kid lands in "Mafia Town" where she follows a mysterious girl with a mustache, who helps her find a Time Piece that had fallen into a fountain. Hat Girl also can find an umbrella. Players also can get the umbrella without seeing Mustache Girl.

Items in this Act