Mafia Town Act 4: Down With the Mafia 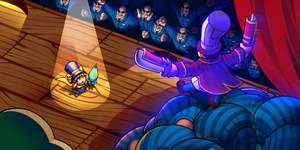 Intro to the Chapter

Down With the Mafia is the last main story Act in Chapter 1: Mafia Town. To unlock, you need to complete both Barrel Battle and She Came from Outer Space.