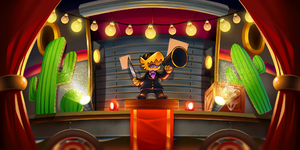 The Conductor is a important Character in Chapter 2: Battle of the Birds. He is the leader of the owls and the sworn rival of DJ Grooves.

Although it is implied that the Conductor is an owl, he doesn't look like one in appearance. The Conductor has orange-yellow feathers and a large mouth with an array of fangs that give him an eerie look despite his short stature. He has no visible eyes, and wears a black conductor's hat with a golden-yellow band and a black suit with a lavender tie and small yellow buttons. He also wears grey pants and black shoes.
Personality-wise, he is loud and competitive, and speaks with a strong Scottish accent. He has no regard for others, to the point that he doesn’t care if all the owls blow up in the act Train Rush. Despite his disregard for the safety of others, he loves his train, even calling it his baby.

It's revealed in the time rift mission that both The Conductor and DJ Grooves have dreamed of being directors ever since they were little. Their feud started when they both rented the same studio and they have been enemies ever since.

The Conductor has several stages to his battle, with the first one being the simplest. After acknowledging Hat Kid, the Conductor will jump up onto the side of the arena, pausing a moment before jumping at the player. This attack does AOE damage within a short range, making it slightly tricky to avoid. After jumping the Conductor will linger for a few seconds, giving the player a chance to attack him. If the player hits him or doesn't attack him in time, the Conductor will leap back to the stage before repeating the process. He might also jump up off the stage onto a golden disco ball that sends out damaging shockwaves when it hits the floor. Like with his other attack he lingers on the ground for a moment after attacking. After 3-4 hits he will become enraged and pull out a knife akin to the one in Murder on the Owl Express. Suddenly the lights will dim until all that can be seen clearly is the blade of the knife. The knife will shoot at the player, dealing damage if it hits. The lights will come back on and the Conductor can be seen holding the knife. Again, he will linger, leaving him open to attack. After being hit or let to stand there, he will jump back, pulling out another knife. This time, instead of dimming the lights, he will simply start jabbing the air and slowly approaching the player. This effectively creates a barrier in front of him, making it so you can only attack from behind.