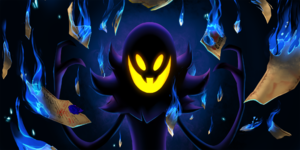 The Snatcher in the final intro of subcon forest

The Snatcher is an important character in the third chapter Subcon Forest of A Hat in Time. He is the ruler of Subcon Forest and he steals Hat Kid's soul so he can use it to make her do tasks for him, and is the main antagonist of chapter 3.

The Snatcher is a large shadowy figure with a long frill around his neck, two yellow eyes and a large smiling yellow mouth with two fangs sticking down.

Before the events of the game, the Subcon Forest was a kingdom full of life and was supposedly ruled by a Queen and her daughter, Princess Vanessa. Princess Vanessa was courting a Prince, who she started to obsess over. Soon the princess started to feel jealous of the prince, to the point that she would prohibit the Prince of eating bacon or seeing his particular tutor. The Princess (who later was crowned Queen Vanessa) started to be corrupted by her jealousy, until one day she saw the Prince holding the hand of another woman (though he was simply buying flowers for the Princess). Heartbroken, she ran back to the manor. When the Prince returned she imprisoned him in the Manor's basement as punishment where he died, presumably becoming the Snatcher.

The Snatcher boss fight will start with him stealing Hat Kid's hat, meaning the player can't use any of your hats' abilities (sprinting, throwing potions, etc.) during the battle. During the first phase of the boss fight the Snatcher is invincible, making the player simply try to stay alive. He will use the following attacks: He will attack the ground in certain areas with a blast of energy that erupts out of the ground after a few seconds. Snatcher summons two crowds of his minions that will spin around the arena as he directs them. As his last attack of the first phase, he will summon varying amounts of potions that detonate when hitting the ground. First he will summon a few accurate flasks. If the player is still alive he will summon 'a thousand' inaccurate flasks. Finally he will summon just a single flask. If the player avoids it he will make it float above Hat Kid's head, telling her to give it a chance. This attack can be avoided by simply running.

This section isn't complete, but will be in the future.